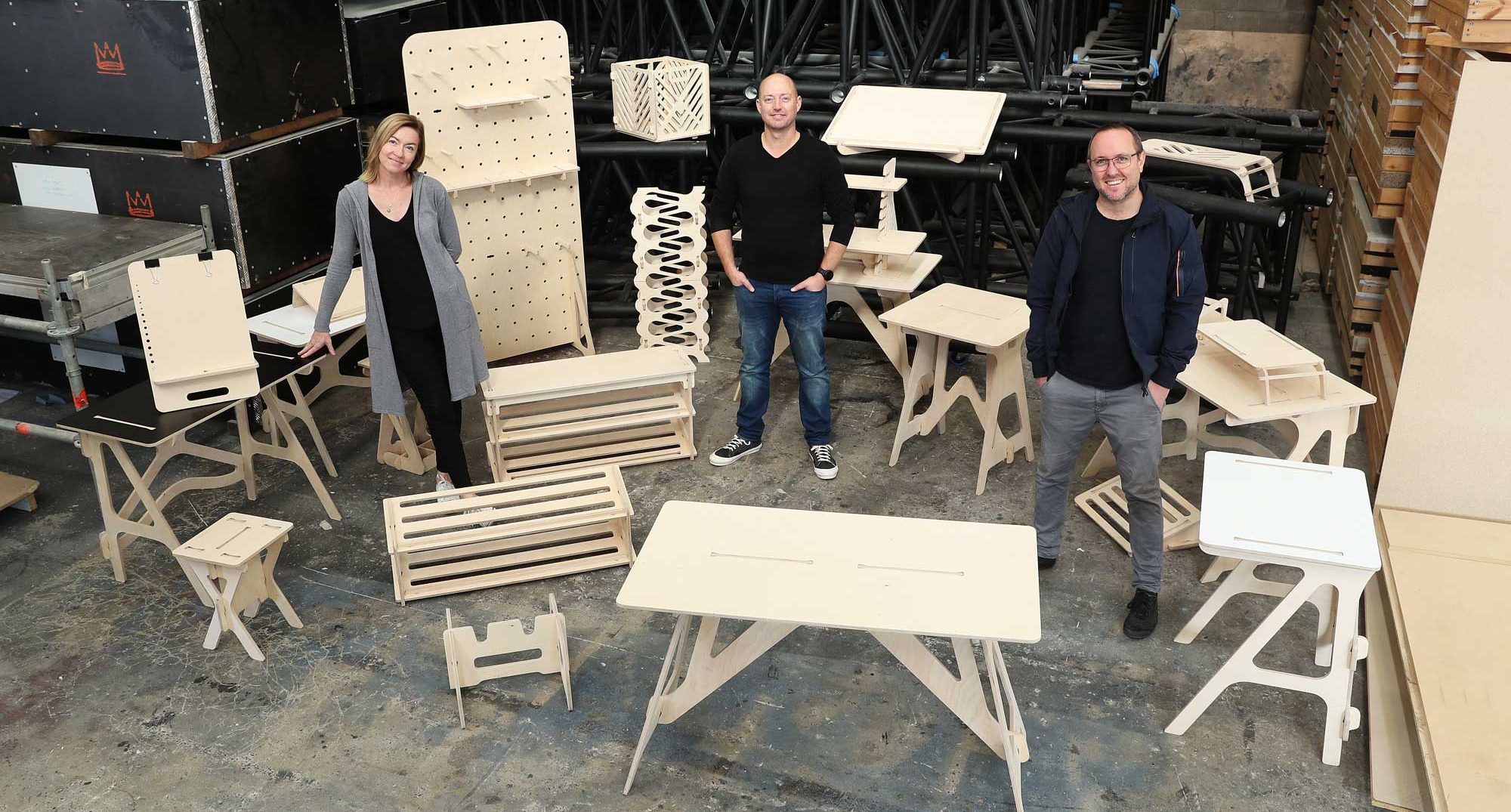 The Innovator October 2020: How to launch a new business in a pandemic

By The Innovator team
October 15, 2020
Over the past five years Sydney-based events company Stagekings has designed and constructed enormously complicated stage sets, from a full-replica of Edinburgh Castle to one of Shakespeare’s Globe.

“We’ve always had a reputation where we will have a go at anything,” says managing director, Jeremy Fleming. It’s that attitude that helped the company pivot fast when the Covid-19 hit. According to I Lost My Gig, people working in the creative industries in Australia had lost $340 million in income by April, after public gatherings were banned in March. At that time, Stagekings was preparing concerts for Miley Cyrus and Robbie Williams. Within days, the team had regrouped and designed and 3D-printed a prototype work-from-home desk. Ten dollars from each sale would go to the charity Support Act, which is helping out of work people from the events industry. Five months later, IsoKing has sold more than 15,000 items, donated $50,000 to charity, and released more than 40 different products ranging from kids’ desks and wine racks to safety screens and footrests.

We talk to Fleming about the importance of flexibility in your team, the challenges of launching a new business in a pandemic, and his plans for the future.

How did the idea for IsoKing come about, and how did you launch so quickly?

A friend of mine who works in production in Ireland suggested the idea. We have a CNC router, skilled people, and Mick (Jessop, head of production) has a furniture hobby.  The ban came into effect on a Friday, and by Monday morning we had 3D printed a few small stand up desks. Throughout Monday it went from an idea, to getting some birch ply in for cutting, to getting one of the router operators to come in. Tabitha (Fleming, director) built an ecommerce site Monday night and we took photos of the products on Tuesday. We launched on Tuesday at 3pm. We had to tell most of our 23 staff to stop working the previous week. But a few weeks later we had 52 people – my guys, plus a huge amount of out of work events people. We now have four CNC routers operating 24 hours a day, and 70 employees.

What have been the biggest challenges of launching a new business during a pandemic?

It’s been a massive learning curve. We have never done ecommerce before, for instance. But the teams on the router knew what they were doing, and we have good carpenters so that was not a huge training process. We set up the desks far enough apart for social distancing, and bought a temperature gun so every person gets checked every morning and is sent home if they have a temperature.

How did you market the furniture?

Everything came through Facebook. I wrote a post and put my heart out there. I said: ‘Look, we’re in trouble. This is an idea we’ve had and it’s going to keep our good guys working. We’ve had to change our life for now but if it keeps a few guys working and people at home have better desks, that’s great.’ That post was quickly read by 500,000 people, and shared 1,400 times. That’s really what kicked us off.

What are the challenges of pivoting to such a different business?

It’s so different. Stagekings is a project-based business. There is a lot of work that goes into preparing for those projects and festivals are sometimes difficult. With IsoKing, people order online and we make sure they get what they want on time. I look to do things the way I like them to happen – I like to get things quickly. But for a lot of people that was an unrealistic expectation right now. I want next day delivery. So we got warehousing facilities in all capital cities in Australia and that’s now credible.

How have the furniture designs evolved over such a short space of time?

People are always asking if we can make something bigger, wider, or maybe a corner desk. So we are always putting new stuff on the website. We are also setting up a bit of a worldwide partnership. We got the idea to do this from Flying Elephants in Ireland, and we’ve now passed on some of our ideas to a company called Compaqt in the Netherlands.

What are your predictions for the future of the events industry?

We were hit first and I think we will be the last to come out of it. We don’t do a lot of events that are under 500 people, but the first thing will be to reintroduce smaller events. I can’t see a large scale music festival happening this year, maybe early 2021, which is really difficult for people and it’s a tough situation. We seem to be in a good position in Australia currently, but for the big events we need to bring international talent and that will be difficult.

What has this process taught you about being a leader?

The biggest thing for me is flexibility – you need it in the business and people. We’re giving some of our carpenters a little bit of ownership. One stepped up and set up a dispatch system second to none. It’s just being flexible, and if you’ve got an idea just to go for it quickly. Provided the numbers add up.

It’s a scary time. One thing that’s come out of this is it’s taken everyone working with us away from the negativity and given everyone a bit of a positive. The response we have had is actually mind blowing, and we’re trying to share that with everyone – putting the numbers on the board every day so they can see how many orders we’re taking. We had 3,000 orders in just four weeks and can provide next day delivery for metro areas.

We understand work from home desks won’t have the same demand as at the start of lockdown. But we’ve now released over 40 products, with many more in the planning.  So we will continue to develop products that should have good longevity, and keep it running as a side business.

Innovation in Action | December 2020: Cautiously optimistic about the future

END_OF_DOCUMENT_TOKEN_TO_BE_REPLACED

Innovation in Action | November 2020: Brands rethink how they do things & provoking consumers to think differently

END_OF_DOCUMENT_TOKEN_TO_BE_REPLACED

The Innovator October 2020: How to launch a new business in a pandemic

END_OF_DOCUMENT_TOKEN_TO_BE_REPLACED
back to all posts